Christmas is coming, and my family absolutely loves Christmas lights. I leave the job of putting up the lights in Dove’s capable and enthusiastic hands.  Each year, he puts up the lights that we already have, and adds something new. This year was the first that he selected one of those inflatable lawn decorations.  A glowy unicorn, with a Santa hat. The reasoning for his choice was clear. 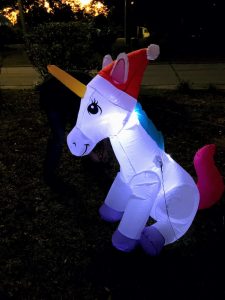 Cat is currently obsessed with unicorns.  The obsession is real.  Her pretend play lately is all about unicorns.  Being a unicorn, living in ‘unicorn land’, caring for baby unicorns.  So, Dove brings her a Christmas unicorn. A light up unicorn in her yard, as tall as she is?  You know she’ll be on cloud nine. Christmas magic. But that’s not quite what happened. I was inside when Dove first showed the unicorn to Cat, and by the time I got outside, things had turned sour.  Dove was angry, and trying to get some space to process his feelings.  Cat was clearly upset, but seemed to be trying to act happy in a bid to cheer up her dad.  She seemed a bit frantic. I had clearly missed something pretty big. “What happened?” I asked Dove.  “Apparently the unicorn isn’t good enough.” he groused.

I called Cat over and asked about the unicorn.  As she explained, I began to get a picture of what had gone wrong.  Cat was initially very excited about the unicorn.  Seeing it in the yard was indeed a magical moment.  But then, she tried to talk to it. And realized it couldn’t talk.  She tried to play with it, and realized it couldn’t play. She tried to entice it to follow her around the yard.  It didn’t follow. She tried to hug it, and accidentally dislodged one of the cables securing it to the ground. She was informed that she needed to be more careful.  And it was about then that the disappointment overcame her.  Not the outcome Dove had hoped for. He was frustrated – his happy anticipation of Cat’s reaction to the unicorn had been completely crushed. She was upset. The magical unicorn in her yard had turned out to be decidedly un-magical. 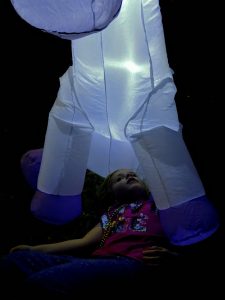 As an outside observer, I was able to have compassion for both of them. And, having spent my days with Cat, I was able to guess that there was something deeper underneath Cat’s apparent disdain for the beautiful yard unicorn.  Cat and I had quite recently had “the talk” about unicorns. It started when I asked her what she wanted for Christmas. She didn’t want much, just a real, alive baby unicorn please. I began by proposing some alternatives. A unicorn toy, perhaps? But no, Cat was very specific in her request.  A toy would not do.  So, we had a serious discussion about unicorns. About fantasy versus reality.  About real and not real.  She was sad, but resigned.

As she and I sat on the porch, I thought about our previous conversations about unicorns.  “Cat,” I said, “When your daddy told you there was a unicorn outside, I bet you thought it was a real unicorn. I bet you hoped, for just a minute, that I was wrong and that unicorns really are real.”  She nodded, and began to sniffle. “But then, it turned out to be just a toy after all.”  Suddenly, the dam burst. She began sobbing in earnest. She was completely overcome with grief and loss.  Seeing this sudden outpouring of real, honest emotion, Dove’s frustration was instantly gone and he came over to help me support our girl as her little body shook with the intensity of the grief she was experiencing.  We held her, comforted her, empathized as best we could. So much emotion.  And then, after working through the bulk of this onslaught of grief and pain, she suddenly asked us a startling question.  “Mom? Dad? Does everybody die?”

Excuse me, what?  Where did that come from?  But she asked the question, so we answered to the best of our ability.  Yes, everybody dies. We live our lives, and then die, and make way for new life.  She listened soberly as we explained our understanding of this confusing part of our world.  And then she had another question. “We live our lives, get old, and then die, right? Is it only the old that die?”  No. We told her. We can die at any age. She braced herself for her next question. “So, kids like me can die.”  Yes, Cat, they can. “And…grown ups like you can die.” Yes. Babies can die. Kids can die. Mommies and daddies die sometimes.  She was quiet for a very long time, just snuggling with us. She was clearly facing down a harsh truth that she had been trying to evade for awhile.

Makes sense that death is on her mind. Her grandfather passed away last year, after moving in with us so we could help care for him at the end of his life.  Her great-grandmother is in the end stages of dementia and was just switched to Hospice care. Her dog is 14 years old, and is showing more and more signs that he’s ready to go.  No doubt she’s picking up on a lot of big feelings about death from us. And we have always been completely honest with Cat about the realities and certainty of death. And, clearly unicorns were somehow linked with death in her head.  For some reason, accepting the sad truth about unicorns was, for Cat, a first step towards beginning to accept the devastating truth about death.

After giving her some time to process, we began to talk about our Christian faith – about Christ overcoming death, and how our faith gives us hope in the face of the harsh truths we all live our lives with.  We couldn’t have planned a better segue into a deep discussion of the reason behind all this Christmas stuff we do every year. We talked about how the reality of death moves us to live our lives with more joy, love, and compassion. The sweet moments made sweeter by the knowledge that they are just moments, passing us by.   Then we just sat together, all three of us, looking at the Christmas lights and thinking our thoughts. We waited until Cat was ready to move forward, and we all took some comfort in our standard bedtime routine.  The sun was setting on this day, yes, but we can fall asleep in comfort, trusting that it will rise yet again.

This incident was yet another lesson for me – a reminder that Cat, and all the children I work with are complex and deep-thinking little beings. That while their conflicts, fantasies and crises may look trivial to my adult eyes,  in truth they are anything but. It is always, always worth the time and effort to trust, empathize, listen, and dig a little deeper.

One thought on “Christmas Unicorns and the Certainty of Death”