Expectations are the enemy of parental happiness

This is an idea I’ve come across in various places, and I find it to be absolutely true.  Embracing the concept of unschooling has been a gradual process of letting go of any and all expectations I have about parenting in general, and education in particular.  I still have some work to do in this regard. But every step I’ve made in the direction of fewer expectations has resulted in my life being noticably better. 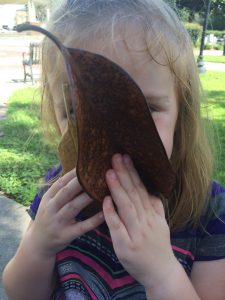 I approached this morning with a simple expectation.  We would go to storytime at the library. This is a weekly occurrence that Cat has always enjoyed immensely.  The library is walking distance, so we generally go on foot (and she rides her balance bike). Our usual route goes by a duck pond and the downtown plaza, and we often stop to play on the way home.  This routine has always made for a fantastic morning.

Until today.  I was determined that we were going to make it to storytime.  We got ready with plenty of time. I packed up tasty snacks and even remembered to bring food for the ducks in case we felt like stopping at the duck pond.  Cat was excited to go. So off we went. 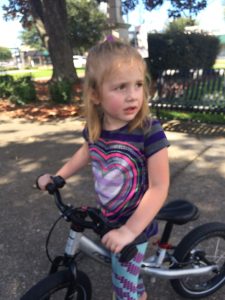 We got to the end of the driveway and Cat pointed the opposite direction of the library. “Let’s go that way!”  “No, Cat, the library is this way.” We made our usual meandering progress.  Progress got slower and slower. Cat tried to steer off in the wrong direction repeatedly. She started breaking rules (little ones, but still).  It was a bigger struggle than a bike ride has literally ever been. We got over half way there, and Cat came to a stop. “Ow, mom, ow.”  Her toe hurt.  She needed to sit down. We turned around and headed back to the plaza.  I pointed at a nearby bench. She said no, she wanted to go to a different bench. She headed over to a bench in the middle of the plaza.  I glanced at my phone.  Four minutes until storytime starts.  We will definitely be late. But late is ok!  We can still make it! I looked at her toe. It was fine. She told me it’s her heel that hurts now.  Her heel also looked fine. She asked for a snack. I frustratedly told her that she could have a snack when we got to the library.  I really wanted to get going.  And we had explicitly talked about how we would have a snack at the library as we usually do.  My requirement seemed totally reasonable to me.

But then I thought about it.  I wanted to go to the library.  But Cat wanted to sit on a bench in the plaza and eat her snacks.  So I finally asked her the important question, the one I had avoided actually asking until this point. Did she want to go storytime at the library? (Of course I emphasized all the things about storytime that I know she loves).  No. She did not.

I spent a few moments internally cataloging my own reasons for wanting to go to the library.  I had a backpack full of books to return, but they weren’t due today. Not important.  I enjoyed library time, but Cat’s lack of enthusiasm would surely put a damper on that.  Not important. Then I realized the truth. Storytime at the library was the only thing on our calendar that resembled a traditional preschool setup.  Cat sits on the floor with other kids her age, sings songs, hears stories, does a project. Then they run around together.

I had been telling myself that storytime was especially valuable because it was a consistent social outlet for Cat.  Surely it’s critical to schedule in social time for an only child who doesn’t go to school! But I know that sitting near other kids and listening to an adult talk is not something that is particularly beneficial for social skills development.  Of course the kids try to socialize, and they’re told to be quiet.  They’re allowed 5 minutes of free time at the end, and that short block of play is the only actual social time.

As I sat there, I slowly came to the realization that library storytime had been, for me, the thing that allowed me to feel ok with how blatantly Cat and I violate society’s rules day and in day out.  It gave me something to point to when I doubted myself about Cat’s complete lack of schedule and anything even resembling traditional preschool. At least we do library storytime! That’s something! And Cat loves it! 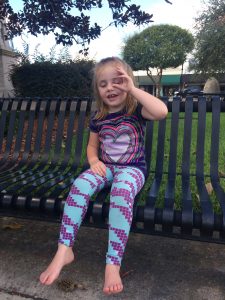 But not today.  She didn’t want to go.  And my knee-jerk reaction was to withhold food.   But I’ve decided I do not want to parent like that.  That is not how our family works. The emotions subsided and my rational brain took over.  I recognized that my need to feel like a good parent had been overriding my awareness of what Cat actually needed in that moment. The only reason I should ever take Cat to library storytime is that it fills her needs. And Cat had clearly communicated that she didn’t need library time today, in many different ways. I needed to make the choice to be a good parent.  Not look like a good parent. I let go of the library goal, reminding myself that the whole idea of what I’m trying to do here is trust my kid and follow her lead. I pulled out the snacks.  And her water bottle, and we sat together on the bench watching the world go by. 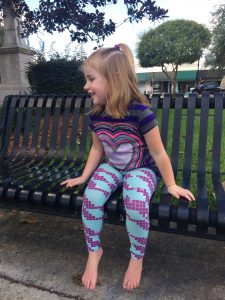 After about 10 minutes of snacks and calm observation, I pointed out the leaves that were all over the ground behind our bench.  She walked around gathering handfuls of leaves. We observed the fascinating patterns on the leaves, felt the textures, made observations. She wandered a bit more and then came back to me grinning from ear to ear.  She had found a leaf that was green on one side, and brown on the other! Surprise leaf! 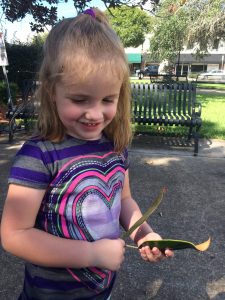 She stretched out on the bench and observed the world through the slats for awhile. 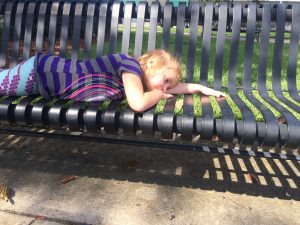 She found some seed pods that were full of little red seeds.  She gathered as many seeds as she could find and we played a few counting and math games, using the seeds as our math manipulatives. I told her how seeds are like baby plants, and that with water, sun and time they grow into plants and trees.  She wanted to put water on her seeds. Immediately.  I tried to explain the fact that it is a bit of a slow process, but she didn’t really understand. 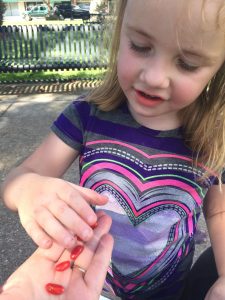 I told her that the splash pad would be turning on in just a few minutes, so we headed that way.  When the water turned on she tried getting her seeds wet and was a bit disappointed when they didn’t immediately grow into plants.  But she quickly moved on to some serious splashing. Another family arrived almost immediately and the two girls splashed and played together.  I gave them the empty cups from our snacks to use in splashing and pouring. Other friends arrived. Cat wound up playing at the splash pad with a several different families for the entire two hours that the water ran.  She had an absolute blast. 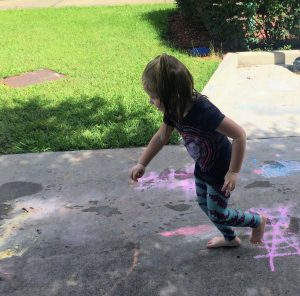 At that point she was clearly quite tired so we headed home.  All in all we were out on our adventure for nearly 4 hours. 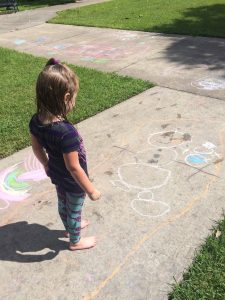 In hindsight, staying at the plaza ended up being a far better option for socializing than the library had any hope of being.  She had 2 hours of open ended playtime, outside, moving her body, with friends there the whole time, in addition to two hours of biking and relaxing, and exploring with me.    If I had insisted that Cat continue to the library and join storytime, it is entirely possible that she would have had a fantastic time. But it’s also possible (and more likely, I think) that she would have continued to act up and cause trouble.  She just wasn’t in the right headspace for an adult-led, structured activity, and I’m glad I (finally) understood that. I believe that it was my moment of letting go of my expectations that made our morning peaceful and playful, rather than a battle.

I’m sure we will go to storytime again in the future, when Cat chooses it.  But it wasn’t where we needed to be today.