Space unit day 4:  What Sam Needs is a Spacesuit

We tried using playdough instead of fidgets today to keep their hands busy during story time.  This worked very well.  They stayed focused on the stories, and we ended up reading twice as many books as usual. 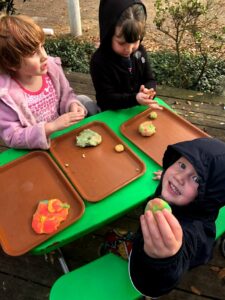 After circle time, I pulled out the vacuum sealer again. The moment the kids saw it, I could see the concern on their faces.  On the last school day we had used it to vacuum seal our sheep puppet, and the experience had clearly been mildly traumatic for the children.

I very much wanted to help them reframe that frightening experience in a new way.  So, out came Sam.  Sam immediately initiated a discussion about what had happened last time, and how scary it had been.  Sam pointed out that as a stuffed puppet, he has no real fear of running out of air.  Humans, though? Humans face a real risk in circumstances where air is not plentiful.  But. But!  Humans have gone to space, anyway.  We talked about bravery and overcoming obstacles. Sam spoke in admiration of the bravery of humans who take risks like that.  How, he wanted to know, could humans do it?  What did they do to go to space and survive? 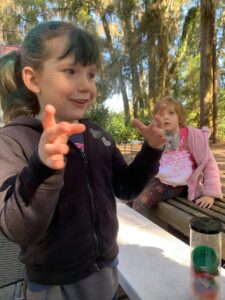 The kids explained to Sam about space suits, and the oxygen on board rocket ships. We talked about what materials these things have to be made out of to make them airtight. (Cardboard will not do!)  Then, we used the food saver to (sort of) demonstrate how an airtight container can protect things from a vacuum.  Since Sam was too big to fit in a mason jar, we used his puppet friend Giraffy to demonstrate.  We put Giraffy into his mason jar spacecraft, and then placed the mason jar into a food sealer bag and vacuum sealed that.  The kids watched carefully, but saw that Giraffy didn’t change at all.  No squishing, flattening or wrinkling.  Not a perfect representation of a ship in space, but it kinda demonstrated the idea.

The kids wanted to try other things.  We vacuum sealed the giraffe in the mason jar at Leo’s request.  Then we used one of the same balls we used last time  – it expands when we remove the air from the jar, but doesn’t expand when we seal the mason jar, and then vacuum seal the jar in a bag. 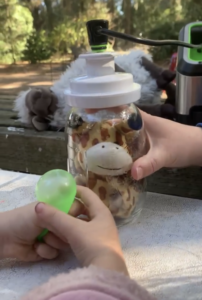 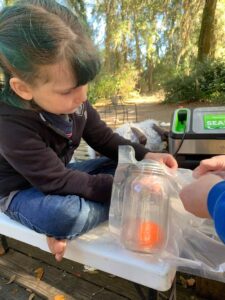 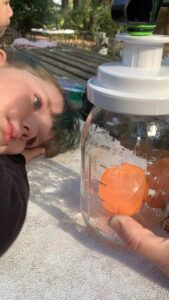 Next, Maya declared that she wanted to use the easel to teach Sam about space.  I carried Sam over to the easel where he enthusiastically expressed his excitement about learning.  Maya explained to Sam that space is a vacuum, but that he can be protected from the vacuum by a space suit.  She drew a sheep space suit on the easel. 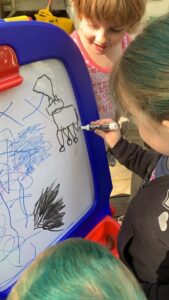 Then, she pantomimed magically putting the space suit onto Sam. Then, she drew ‘space’ on the easel, coloring in a large black area.  She told Sam to try going to space, pointing to the spot she had drawn. 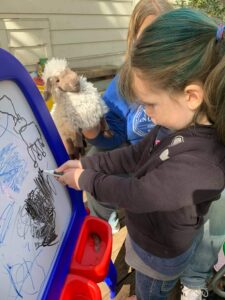 I played right along with her, pretending that Sam used the spot on the easel to jump into space.  He took a deep breath, to see if he could indeed breathe in the imaginary space suit.  He breathed deeply, and enthusiastically thanked Maya for her help in overcoming space.  At this point all 3 kids entered into a bit of mastery with this process.  Each of them drew some demonstration of ‘space’ on the easel or porch, and asked Sam to test if he could breathe in their version of space.  We did this again and again, pretending that Sam was going into space over and over, and discovering with delight that with his imaginary space suit, he can still breathe in the vacuum of imaginary space. 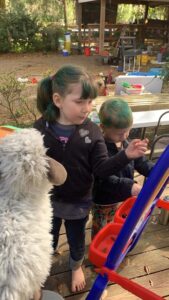 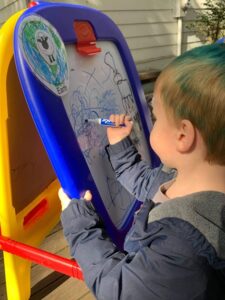 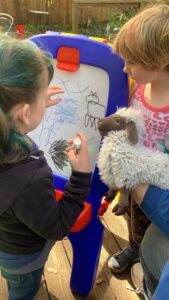 While I was planning today’s activities, I had assumed that making Sam a physical space suit would be the resolution we had needed, and had laid out various craft and recycled materials with that in mind.  But the kids found a different way to achieve the same idea with their markers and sidewalk chalk.  They were perfectly content with Sam’s invisible space suit and flatly declined when I asked if they wanted to make one with tin foil and recycled plastic jars.  They were ready to move forward, and played happily for the rest of the day, content that Sam was safely protected from the cold vacuum of space.