AKA:  Whoops, I accidentally traumatized the children

I usually set out fidgets on the table for the kids to play with while we sing songs and read them stories.  Today though I figured I’d change it up.  Instead of fidgets, I pulled out trays and a box of dominos.  I placed around 7 dominos on each tray, and told the kids they could play with those instead of fidgets today.  Maya immediately asked how to play with them. I told her she could do whatever she likes and challenged her to figure out something cool to do with them.  She huffed in frustration.  “Just tell me,” she said.  I couldn’t help but chuckle.  Goes to show, give kids restrictions, and they’ll rebel. Give them freedom, and sometimes they’ll still rebel.  Exerting their independence is just what they do.

All 3 kids began playing with the dominos in earnest while we began our ‘hello’ song.  Leo happily began arranging his tiles and declared he was making a ‘bad robot.’  Maya and Cat seemed to realize at the same time that the dominos held different numbers of ‘pips’ in each section and they both became intensely engrossed in some serious math work. They counted the pips, and began arranging the dominos according to different number orders and patterns.  It was clear that they were paying absolutely no attention to our songs. Leslie and I just watched them work for a few minutes, bemused. Then I shrugged and said “well, you and I can still sing,” and Leslie and I sang songs together until the kids began to notice the world outside of their dominos again.  At this point story time commenced.  Lesson learned – next time I decide to use something as a fidget that they haven’t played with in awhile, I need to schedule in a brief play session first. 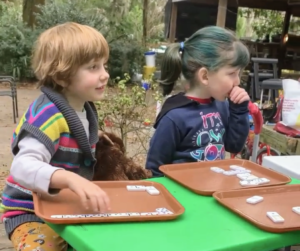 Stories and songs complete, we turned back to our discussion of space. Quick recap on the adventures of Spacefaring Sam: Last week, the kids taught Sam the puppet about gravity.  And explained that what he needs to escape Earth’s gravity is a rocket ship.  We built Sam a rocket ship made out of cardboard.

This week, we put Sam in his rocket ship, counted down, and pretended to blast him off the Earth.  Unfortunately, poor Sam immediately ran into a problem.  His cardboard rocket ship was not airtight, and he suddenly found himself unable to breathe.  I asked the kids to hold their breath and see how it feels to stop breathing for a brief time. We all took a big breath and I announced that Sam made a speedy return back to Earth, and wanted to understand what had just happened to him.  The kids provided Sam with a pretty thorough explanation of air – that it’s invisible, everywhere, and we need it to breathe. Maya explained how critical air is to our speech process. She even volunteered that air surrounds Earth because of gravity, but that there is no air in space.  Sam was skeptical.  He declared that air sounds like it’s fake.  He asked if they could think of a way to prove that air is real.  I thought maybe they’d think of balloons, or a fan, or just feeling their own breath. Maya went a different direction – she pointed out that Sam could breathe on the Earth, but hadn’t been able to breathe in space, so clearly air is a real thing.  Sam was convinced. 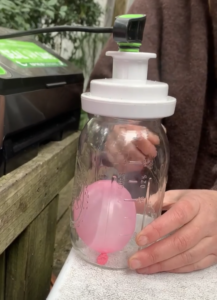 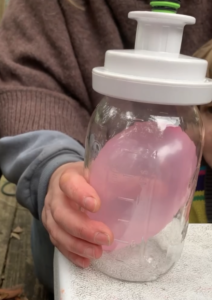 At that point, I talked to the kids about air pressure constantly pressing on us, and explained that we were going to help Sam feel that air pressure by removing the cushion of air all around him.  I placed Sam into a vacuum seal bag and proceeded to seal him in.

This is where I made my mistake.  I had assumed that the kids would be amused by the flattening of their stuffed friend, understanding that all of this was pretend.  I had temporarily forgotten how fuzzy the line between pretend and real can be for young children.  The kids, Maya especially, were extremely concerned about the apparent state of distress our stuffed friend Sam was in as he was sealed into the bag. 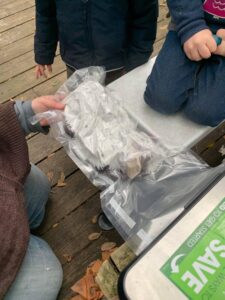 We quickly pulled the puppet back out, showing the kids that the toy had not suffered in any way, but in a stroke of bad timing, it started to rain.  We had to break fairly suddenly to put the vacuum sealer and other materials away out of the rain.  As a general rule, rain doesn’t slow us down much, but today was cold, and cold on top of wet is way less fun.  The kids declared themselves to be done with school, and Maya and Leo were ready to go home.  We decided to end the day early. 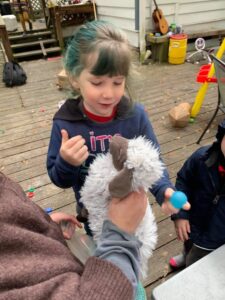 Once everything was put away, we realized that Maya was still visibly upset, and we realized just how traumatic school was for her today.  Leslie held her, and expressed her empathy of Maya’s worries.  We talked about the various upsetting moments. We’d pretended that Sam had blasted into space without oxygen, and then held our own breaths, deepening the kids’ empathy with Sam’s distress.  Then we casually created vacuums in mason jars on the back porch like it was nothing.  I think the very idea that we could simply remove the air from a space with visible results was in itself unsettling.  And then we topped it all off by placing Sam in a bag and removing his air.  In retrospect, I see why this was perhaps not the wisest of demonstrations.  We’ve been actively anthropomorphizing Sam for over a week.  If he were truly alive, this would have been an incredibly cruel thing to do, and the kids were acutely aware of that.

Maya needed to see that Sam was really ok.  I pulled him out, and had him enthusiastically explain to Maya that he was just fine.  That he has no lungs, just stuffing.  That since he’s a stuffed animal, he has no need to breathe, and he was just pretending when he said he couldn’t breathe in space. This was visibly relieving to her, but I don’t think either Cat or Maya were entirely settled from their worry until we pointed out that my little vacuum sealer could *only* seal things that fit into mason jars or bags.  There was no way that we could somehow accidentally vacuum seal them in a bag or a jar.

For me, it was a bit of an unsatisfactory way to end the school day.  I had made the mistake of having expectations about the day.  I had very much expected them to find the experiments with the vacuum sealer silly and fun. I had looked forward to letting them loose with the vacuum sealer, trying their own experiments and making their own predictions.  None of that had happened.  Instead, the experience had been upsetting to them and then had been cut short by rain at the exact point of the upset.  I definitely had to process some disappointment.

Reflecting back now, however, I feel more positive about our day. I’ve decided to change my plans for the next school day – instead of moving on to discussing orbits and doing activities about rotational forces, we’re going to finish our ‘vacuum’ discussions.  We’re going to come straight back to the point of trauma, and we’re going to work together to find a solution. We’ll make a space suit for Sam, complete with an oxygen tank, allowing him to concur the unforgiving vacuum of space, and continue on his journey towards the stars. Have I instilled a visceral fear in the kids of running out of oxygen to breathe? Perhaps. But…is that a bad thing?  I’m not sure it is.  Choking and suffocation are some of the most common ways children in our society come to harm or death.  Hopefully Cat and her cousins have a deeper understanding of the very real danger I’m talking about when I tell them to not put plastic bags over their heads or wrap ropes around their necks.   Learning about the real dangers in our world is important learning, even when it’s not that fun.