Circle time as usual – fidgets, stories and songs. I am really liking this part of our school day – it’s simple, and more or less the same each time we do it.  I believe that that small bit of consistency is helpful to both me and the kids. 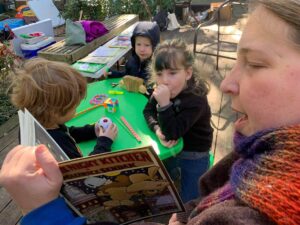 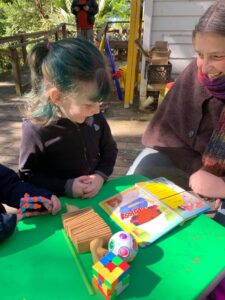 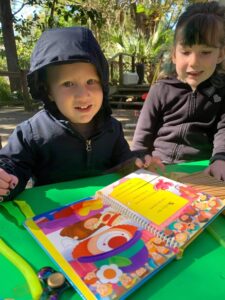 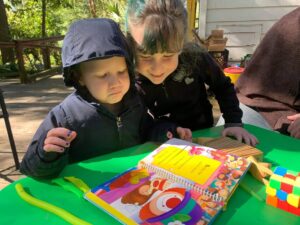 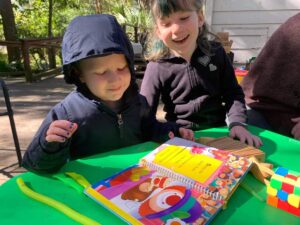 Then, Sam told the kids excitedly about his trip into space.  He reported that the rocket ship and space suit they had built for him had worked marvelously.  Then, we asked the kids to consider where Sam was likely to have gone. What is the next closest thing to Earth?  “The moon!” they exclaimed.  Sam told them that he had indeed gone to the moon.  I used a google image search to show them a variety of photographs of the moon’s surface, including one that showed the Earth in the distance, viewed from the moon.  We pretended that the photos were what Sam was showing us after his space adventure.

Then we began our activity:  Moon sand.  Prep:  I laid out a circular tarp and a sensory bin.  We filled the bin about ⅓ full of play sand. Then I set out cornstarch, shampoo, shaving cream, glitter, black paint, and fragrance oils. We told the kids that they were going to choose an add-in one at a time to add to the sand and make it like moon sand.  We went around 3 or 4 times, with each of them choosing to add something in turn. Some of the time, they explained their reasoning out loud. They chose glitter because the moon is shiny, or they chose something white or black because of the color of the moon.  Soon enough, the sand became a very interesting squishy sensory material, and the kids got down to some serious play.  They largely lost interest in adding in shaving cream and such, but every once in a while they would ask us to add something else, which we did.  They experimented and played with the changing textures. 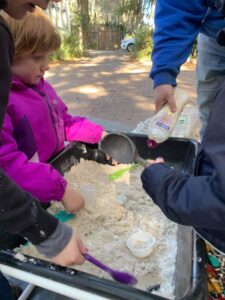 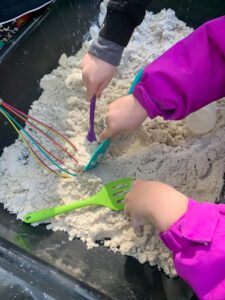 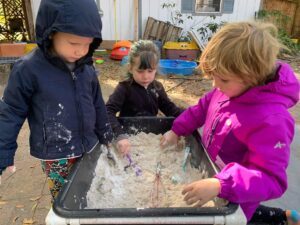 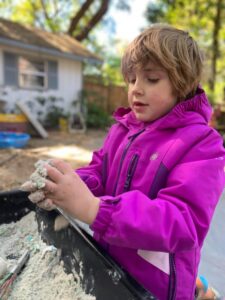 Eventually one bin wasn’t enough – they were crowded and getting frustrated. Leslie pulled out a pie tin for each of them so they could do their own experimenting uninterrupted. We declared that they were making ‘moon pies’ and they immediately switched to a cooking focus in their pretend play, asking for shaving cream ‘whipped cream’ and glitter ‘sprinkles. 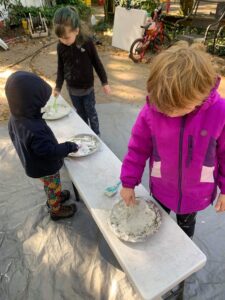 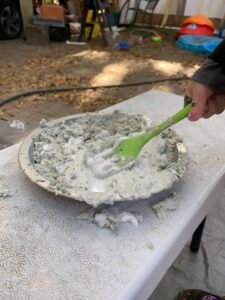 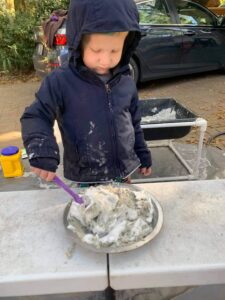 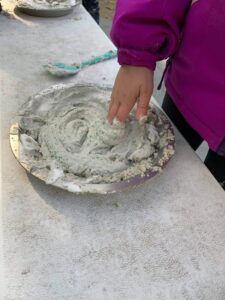 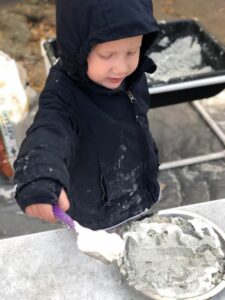 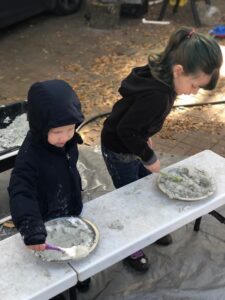 One by one they tired of this activity, rinsed their hands and ran off for some free play.  When they were all finished, Leslie and I set up for the next step.  We dumped the sand back into the sensory bin, and added some extra sand. Then smoothed out the surface, and sprinkled some loose sand across the top.  We got out some toy trucks and a few plastic animals.  Eventually, the kids came back over to investigate what we were up to.  They got really excited when they saw the smooth sand surface in the bin, and were excited to jump back in.  But we explained to them that the flat sand was the surface of the moon, and astronauts can’t touch the surface of the moon with their bare hands because they have to be in space suits. But they can walk on the moon, and moon rovers can drive on the moon.  We invited them to use the toy animals and trucks to make tracks and marks on the surface.  This was a bit of a change from my initial plan. I had intended to arrange the sand in a large circle on the big tarp, and let them walk through it themselves.  Leslie pointed out the downsides of a full-body activity like that on a cold day, and I saw her point.  So, we shifted it to the bin, and used plastic animals.  All-in-all, I think that made the activity much more successful. 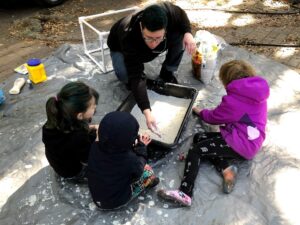 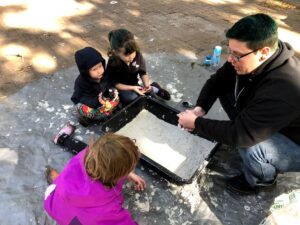 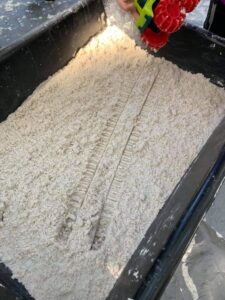 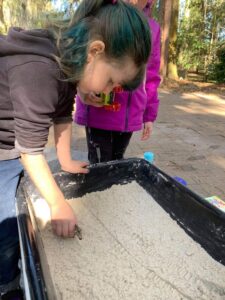 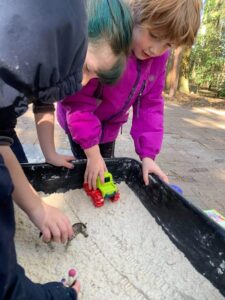 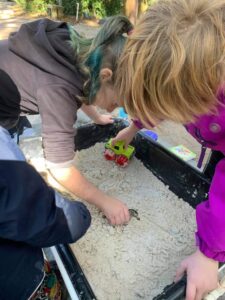 We talked about how tracks in the sand on the beach get washed away by the tide, and tracks in sandy deserts get blown away by the wind.  But that on the moon, with no air, there’s no wind.  And with no water, there’s no tide or rain.  Footprints on the moon just stay and stay.   Then, we talked about the one thing that can obliterate human footprints on the moon.  Meteors!  We re-smoothed the sand, and I made a single ‘moon rover’ track through it. Then we gave the kids balls and encouraged them to pitch them at the sand, destroying the track and making craters.  Pretty soon, the sand looked pretty close to photos of the crater covered expanse of the actual moon’s surface. 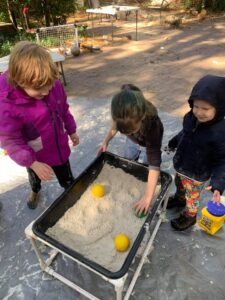 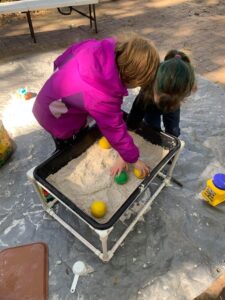 By the end, the tarp on the ground was dotted with sand that had fallen during play.  As we often do, we turned clean up into its own activity. We talked about how we’re lucky enough to live on Earth, not the moon, and we have water.  We gave them each a squeeze bottle of water and they squeezed water onto the tarp, streams of water pushing around the sand.  Then we let them take turns with the hose. 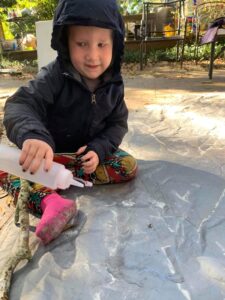 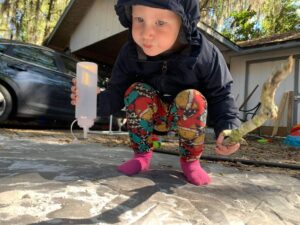 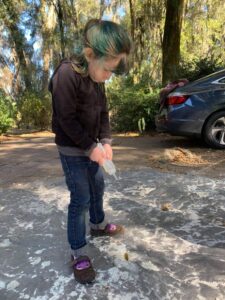 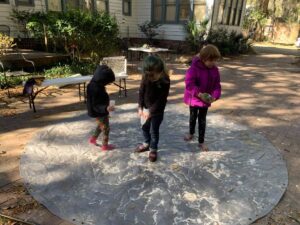 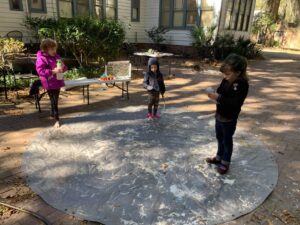 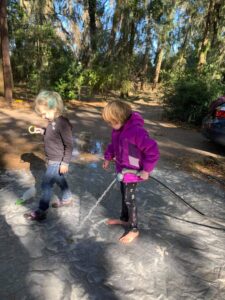 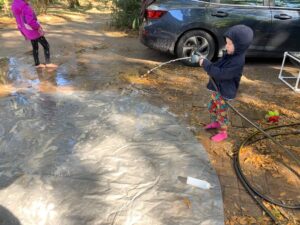 The moon sand experiments wound up filling a good part of the day, and we decided to save the rest of our planned moon activities for our next school day.  Instead of shifting to discussing the moon’s phases, we revisited previous table time activities and played with some puzzles, board games and coloring pages. All in all, a very good school day.  Generally, when I journal about kids’ activities, I contemplate what went wrong and what went right.  But these space school days have just been going really, really well for the most part.  I am a bit surprised at how much learning and play our space unit has provided, even though Sam has only gotten as far as the moon.