Quick overall reflection:  We’re now three weeks into our ‘space’ unit – 6 days total, usually 4-6 hours of school each day.  During this time, we’ve talked about gravity, the vacuum of space, rocket ships, and the moon.  We’ve followed the plan I initially laid out fairly closely, except that we’re definitely going through it more slowly than I had anticipated.  On several occasions, we’ve elected to split a day’s planned activities in half and do them over two days.  I’m glad of this flexibility.  It’s given us the freedom to allow the kids to spend as much or as little time as they chose on any given activity.  My predictions on which activities would capture and hold their attention have been wrong far more often than they’ve been right. Still, we’re offering enough activities over the course of the day to hold their interest.  Sam the spacefaring sheep puppet has proven to be an excellent way to introduce new ideas and encourage the kids in their discussion.  I will likely keep using Sam, or some other character, on our school days going forward.

So, moon day #2. Today was one of those ‘best laid plans’ sort of days.  Last school day we decided to extend our moon discussion to another day, meaning that I found myself with a half day’s worth of ideas.  I needed to figure out how to fill an entire school morning with play-based activities that somehow related to the phases of the moon.  I tried to find links between the moon’s phases and the kids’ interests.  I found myself thinking about werewolves, and the mythology behind them.  So, when school started, I had the outlines of a plan for a game about werewolves. Something with a random element like dice rolling incorporated for building tension.  Perhaps, we do ‘normal’ school tasks for numbers 1-5, but on a roll of 6, it’s a full moon and they all run around and act like werewolves.

But then as I was setting up, minutes before my sister arrived with her kids, I alighted on a new idea.  I was scanning resources on the web for materials I could print out and use when I was looking over a list of the names of the phases, and noticed the ‘new moon’.  That made me think ‘baby moon’.  And immediately I had a whole other idea of how our playtime would go.  I quickly finalized my plan and gathered materials while Leslie helped run circle time. 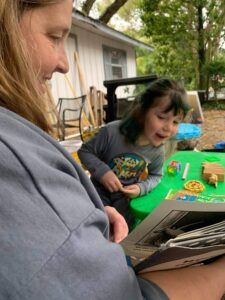 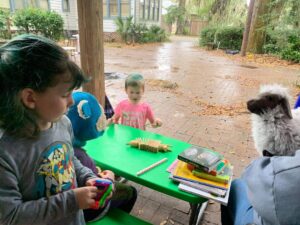 After circle time, I pulled out Sam the sheep.  As usual, he had a burning question to pose to the kids.  He had been to the moon, and had discovered that it was a sphere shape.  This, he explained, was very confusing.  Because when he was a little sheep, he had been taught that a crescent shape was a moon shape.  (I drew one on the board).  So, he demanded, if the moon is actually a sphere, and is always a sphere, why do we call a crescent shape a moon? This led to an animated discussion as the kids explained to Sam that sometimes the moon looks like a crescent even though it’s always a sphere.  They explained that the position of the sun and the moon affect how much of the moon we can see.  Once again, it was clear that they had obtained well beyond an age-level understanding of these concepts entirely on their own in spite of never participating in any formal academic work.  If my goal was to teach them these concepts, this may have been discouraging.  They’ve got the concept.  What is left for me to teach?  But of course my goal  wasn’t to teach them concepts. I was there to promote and encourage play. 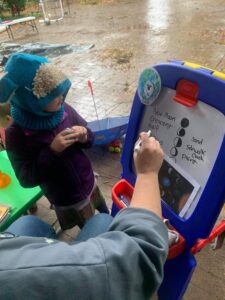 I pulled out a chart that showed the phases of the moon in order, and we talked about the phases one by one.  I told them the terms we use to refer to them – half moon, gibbous moon, etc.  We talked about the words waxing (growing larger) and waning (growing smaller) and why they’re used to describe various stages.  Then we went back to the first stage – new moon.  I told them that the new moon is new, like a baby.  During a new moon, we can see zero of the lit up part, like a baby is zero years old.  Then, I got some rubber squeeze balls and gave one to each of them.  I explained that the balls were their very own baby new moons, and that I wanted them to go find ways to take care of them and teach them about the world. And thus began one of the single most successful activities we’ve done in awhile, in terms of holding their interest and excitement.  Maya and Cat were especially excited about taking care of their baby moons. They figured out what their moons liked to eat, and fed them. They arranged comfortable beds. They taught them about the world, walking around the yard and talking to their moons, telling them about the world. 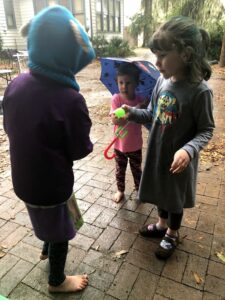 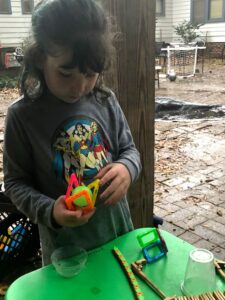 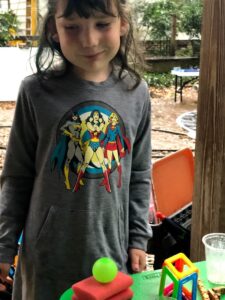 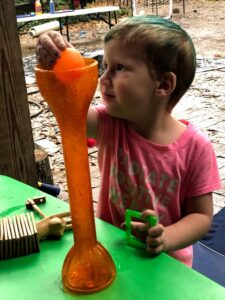 Eventually, they tired of this play and we enthusiastically declared that they had done an excellent job taking care of their baby moons, and that the moons were ready to move to the next stage, waxing crescent.  We sang happy birthday to the moons.  I told them that we had a special activity that is perfect for toddler moons but that their moons would need some help with it.  I handed out pie tins of the same ‘moon sand’ we had created during our last session.  They each got their own pie tin, and we also provided an ice cube tray filled with water, pipettes for water transfer, and a variety of utensils.  I had set these trays up previously, and to add interest I had added a few drops of food coloring and covered them with sand.  I figured that the splashes of color would provide a nice surprise when the kids started playing. 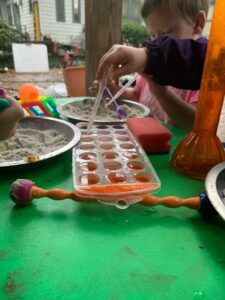 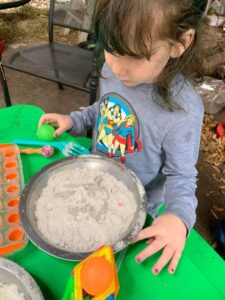 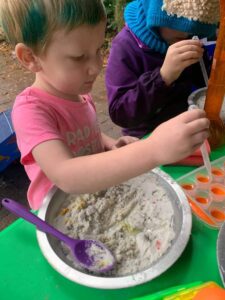 The kids jumped right in, transferring water by the drop from the ice cube tray to their pans, and swirling the sand with their utensils.  We noticed the changes in texture, and made observations about the various levels of saturation. Play went on and on.  Interestingly, even though this was the same sensory material and the same tools we used in our last session, they were playing in very different ways.  They all declared themselves to be making birthday cakes or pies for their moon, but they also began flattening the surface of their sand and making fairly complex patterns and designs.  Eventually, this activity reached its natural close, so we sang happy birthday to the moons again.  We told the kids that since the moons were now big half moons, they needed to learn about writing and the ABCs.  We gave the kids sidewalk chalk and sent them off on the task of educating their moons. The kids wrote letters and drew pictures for their moons on the wet brick. 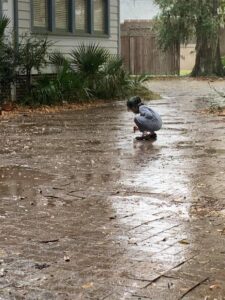 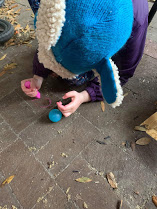 We sang happy birthday one more time, announcing that their moons had graduated to the next stage – half moons.  We had lunch, and then went inside for ‘table time,’ though this time we headed to the play room rather than the dining table. That room gets very dark when the lights are out – ideal for a moon demonstration plus some light and shadow play. First, I used a lamp and a ball to provide the kids with a physical demonstration of how the position of the Earth, moon and sun result in the moon phases we’ve been discussing. Then we turned on the light table and a black light strip for some glowy light and shadow play. 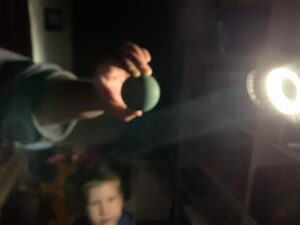 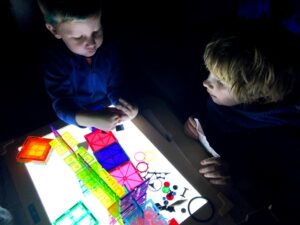 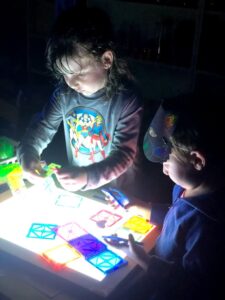 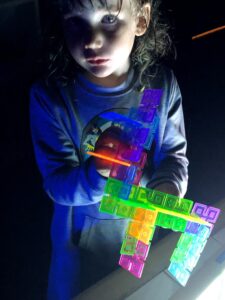 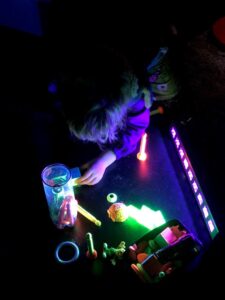 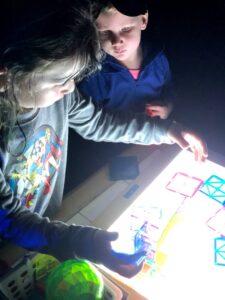 When the kids were all finished, we went back outside and sang happy birthday to the moons one more time, declaring that they had made it all the way to full moon status. We got out some oreos and let the kids use them to revisit the idea of the moon’s phases one last time.  Cat actually declined this activity, in spite of the enticement of oreos.  She’d had a full day and was very ready for some downtime instead. 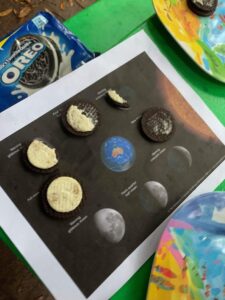 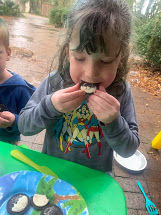 We checked in with the kids at the end of the day, asking how they were feeling about school in general, and our space unit in particular.  They enthusiastically expressed that they liked school, and definitely wanted to keep learning about space.  So, Sam’s adventures are going to continue.  Next week, orbits and rotational forces.  I’m looking forward to another fun day.