Cat was crying – shouting in frustration and panic.  I immediately went to investigate. She was in the kitchen, holding a plastic garbage bag in front of her legs and trying to fend off the kitten, who was engaged in a frenzied game of trying to get her toes through the plastic.  When she saw me walk in, Cat sobbed “The kitty is biting me!” in a voice tinged with panic and frustration. Seeing Cat’s intense distress, I scooped her up and carried her to her bedroom. I shut the door behind us, putting an immediate barrier between Cat and her enthusiastic kitten.

I sat down with her and held her, giving her the stability that she needed to process her fear and grief, and return to a sense of calm.  I checked her toes to make sure no first aid was needed – she was fine. Once the immediate emotional distress had passed, I asked Cat to describe to me what had happened.  She told me that the kitty had gotten playful, and had tried to get her toes while she was watching TV. “Hmm…” I said, “What did you do to solve the problem?” She described her solution. She had fetched a plastic garbage bag to use as a barrier between her toes and the kitty.  What I thought was “A plastic garbage bag?  Thin and crinkly? Over your wiggly toes?  Sounds like kitty heaven to me. No wonder he went nuts.”  What I said was “How did your garbage bag plan work out?”  She burst into renewed tears, this time processing the grief that her clever plan had been such a failure.  “Mommy…it didn’t work.  The kitty kept biting me.”

I stopped myself before explaining to Cat why a plastic bag had been a bad idea. Instead, I encouraged her to continue her problem solving process on her own.  “So, the plastic bag solution didn’t work. What else can you do when the kitty starts feeling playful like that?”   She stopped and considered. “Mommy. Cats are afraid of cucumbers. What I need to protect my toes is a bag full of cucumbers.”  I knew that her idea came from YouTube videos where cat owners place cucumbers strategically and make their cats jump in fear, temporarily thinking the cucumber is a snake.  I had my doubts about her ‘bag filled with cucumbers’ plan. But she was flexing her problem solving muscles and I wasn’t going to get in the way of that. But there was a practical problem with her plan.  “I’m sorry, Cat, but we don’t have any cucumbers right now.” She took a moment to grieve this harsh piece of reality, but then had a new idea.  We would get a bag, and using our crayons, draw cucumbers on it as a warning to the kitty.

At this point, I had fully committed to following Cat’s problem-solving process to its conclusion.  I listened as she proposed her plan, and asked what I could do to help. She suggested that I get a suitable bag while she got some crayons.  As I headed off towards the bags, Cat stopped me. She had come up with a modification to her idea. “Let’s just draw the cucumbers right on my clothes!”  I briefly toyed with the idea of telling her that we don’t draw on clothes, but in truth sometimes we do. Granted, the process usually involves fabric markers or dyes or something similar, but those types of crafts have no more inherent value than Cat’s crayons and cucumber plan.  And, most important, her clothes are her clothes. Her choice. She needed to get dressed anyway so I told her to go get clothes from her dresser while I got a crayon.  She informed me solemnly that I needed to find a green one, since we would need to draw cucumbers as long green ovals.  I agreed.

When I walked back into her room, armed with a green crayon, she proudly showed me the clothes she had selected, along with a plastic fireman’s hat.  “I got a hat too, mommy, so my head can be protected!” Great. Good thinking. She had also added another detail to her plan. “We need to draw the cucumbers in a big, small, big, small pattern, mom.  That will let the kitty know to be careful.”   Yep, solid logic. May as well incorporate some math in our impromptu art activity. We started with the hat, carefully drawing cucumbers around the top in the specified pattern. We then proceeded to work together on the rest of her outfit, adding cucumbers to each piece. Underwear and socks included.  The crayon did not exactly mark the cloth very well. The process looked more like we were adding invisible runes, but this didn’t seem to bother Cat in the slightest. Part way through, Dove came in the room. Cat solemnly explained that she wasn’t available to play until her shirt had cucumbers. His bewildered expression absolutely made my morning.

Once Cat was armed with her cucumber outfit, her concerns about the kitty seemed to fall away, and her firefighter’s hat inspired her to some ‘fighting fires’ dramatic play with her daddy.  And the kitty, having moved on to other activities, left her toes alone.

But here’s the thing.  My goal is not to fill Cat’s head with Facts That Are True.  Instead, I want her to feel confident in her ability to find those truths for herself.  When Cat has problems, it is not my goal to solve them for her, or even to teach her the best solution.  Rather, I see her problems as an invaluable opportunity to support her in practicing the process of independently finding solutions.  If the problem is hers, the solution is hers to work out. And if she lands on a solution that makes no sense to me, but appears to solve the problem for her, I keep my peace.  Maybe I’m the one who doesn’t understand. Of course, Cat does need to learn a great many facts about her world. She needs that kind of learning in the same way that she needs food.  And I don’t need to teach her anymore than I need to force feed her.  I make sure food is available, and she eats when she’s hungry.  I make sure information is available, and she learns when she’s ready.

There are occasional exceptions, of course, times when I step in and solve Cat’s problem for her.  That’s exactly what I did when I separated Cat and her kitten initially. When she’s in crisis, her intense emotions clouding her logical reasoning, I do what is necessary to restore her sense of safety and control. But once she’s ready to step back up to the plate I immediately step aside and return to monitoring and supporting, but not directing or judging.

In the weeks since the cucumber bag incident, Cat has had many opportunities to practice trial and error with her enthusiastic kitten.  And she has had opportunities to observe how Dove and I handle a kitten full of energy. And she has been learning and learning. This morning, she was stretched out on the couch when the kitten came over to investigate her toes.  She immediately put 3 solutions into motion at once. She tucked her feet between the couch cushions, politely asked the kitty to be nice to her, and asked me if I would fetch one of his toys. Then she spent 10 minutes giggling as the kitty worked out his energy by chasing around and pouncing on a toy monkey.  No drama, no crisis, and everybody got their needs met. Cat and her kitty are learning together. 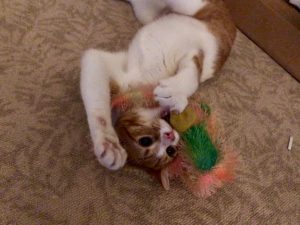