Today was a great day, and a nice little lesson for me in the immense value of following Cat’s lead. Nothing went as I expected in my head, and everything was awesome.

The dog needed a walk, so out we went.  I had exactly zero activity ideas in mind at this point.  I asked Cat if she wanted to go into the fenced yard where she likes to dig in the dirt, and we currently have paint and a water pump available.  She declined. She asked to ride her bike. She rode around for quite awhile, making good use of the ramp that leads up to the porch.

Several days ago I was cleaning out the shed and had dumped out several planters that had probably been in there for multiple years. The soil had hardened into a solid block, and I had just left it by the stairs.  Cat noticed it when she passed it on her bike and climbed off to investigate. She asked what it was. I explained that it was a block of dirt.

I was considering what we could do with it when I remembered that I had been wanting to try a hammer and nails activity.  Cat wasn’t very successful the last time we tried that, but she’s developed a fair amount since then. My thought had been to start with Styrofoam or something similar, but a block of dirt seemed perfect.  I asked Cat if she wanted to hammer some nails into the dirt. She was very interested.

I found a good sized hammer for Cat.  Not a toy, but not too heavy. I did not find nails.  No problem, I had some golf tees in my loose parts area.  Probably better than nails for this use anyway. I handed the hammer and golf tees to Cat and told her to go to it. 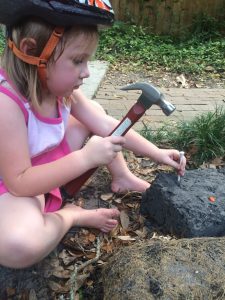 I did not issue any safety warnings at this point, or provide any instructions.  I trusted that Cat had enough understanding of the concept to figure out the process, and I also trusted that she had enough common sense to be reasonably safe with the hammer. 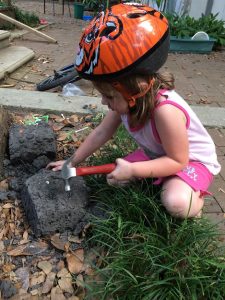 She handled the hammer fine but got frustrated fairly quickly.  The dirt was quite hard and it took a fair bit of effort to get the tee all the way in.  She did get a few in independently but got tired of it quickly. She asked me for help. We held the hammer together and hammered 6 or 7 tees into the dirt.

After some of the tees were hammered in, the dirt block started to come apart.  Cat noticed that a section of it had come completely away from the rest and she could easily pick it up.  She held it over her head and declared it to be a rain cloud. She played with it for a bit, and I wondered aloud what would happen if she stood up and threw it at the ground. 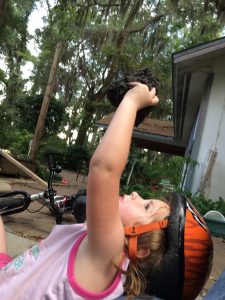 Her eyes immediately lit up.  She jumped up, threw the dirt clod and it smashed in an incredibly satisfying way.  She continued smashing pieces until she had used up all of the loose pieces. She tried to pick up the remaining block but it was too big.  She asked for help, and I suggested she use the hammer to break it up more. 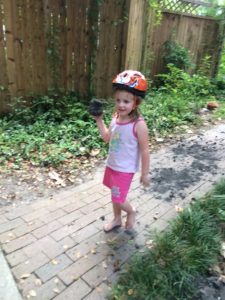 This proved to be a far more satisfying and independent use of the hammer.  It was quite effective at breaking up the dirt block into smaller pieces. She proceeded to systematically break up the dirt block until there was nothing left.  At one point, the remaining dirt was quite hard and well packed, and the hammer was less effective. She asked for help again, and I suggested using the other side of the hammer as a wedge to push the dirt apart.  This worked perfectly.

She experimented with different ways of throwing her dirt clods, including off the edge of the porch, and rolling them down a wood ramp.  (That didn’t work terribly well). When the block was thoroughly demolished Cat immediately asked for some more. I told her that there wasn’t any more but she could help with the cleanup. 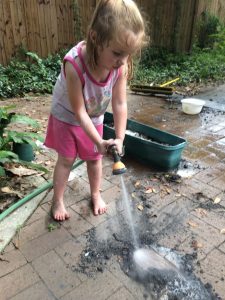 I rarely allow Cat to use the hose directly (I prefer for her to use our various pumps and such) but I figured this was a reasonable time to allow it.  The hose was set on the ‘jet’ setting. The effect of the hose jet on the dirt all over the brick was pretty cool. The hose moved the dirt around like a pressure washer.  I could see that it was immensely satisfying for Cat so I let her experiment with the hose and the dirt for a little while.

Then we turned off the hose,  rinsed off and headed inside. I’m thoroughly happy about how the ‘activity’ went, even though I didn’t plan a darn thing.

Skill development: Was there a general area of development Cat didn’t work on through this series of activities?  Tons of math and science.  Excellent problem solving and independent experimentation. Tons of literacy – vocabulary and language building. Lots of gross motor with the hammer, lots of fine motor with the golf tees. Definitely some emotional regulation – a whole lot of destructive energy released in a totally harmless way.  Pretty much covered all the bases with this one.

One thought on “Dirt Block Demolition”