Cat, Dove and I were walking in the park right after it rained.  We approached a huge puddle on the sidewalk. From Cat’s face it was obvious she was pondering the question that almost all three-year-olds ponder at a moment like this.  “Which method of puddle entry would create the biggest splash?” I took advantage of her momentary hesitation to bring one important fact to her attention. “Cat, if you get your shoes wet, you’ll have wet shoes.”   A passerby overheard and chuckled. I understood his amusement. My statement no doubt seemed absurdly pedantic. But three year olds live in the moment. This obvious and inevitable consequence had not occurred to Cat.

She looked at her sneakers, looked at me.  Again, I answered the question I saw in her face.  “I didn’t pack any extra shoes for you today.” She contemplated this and arrived at a solution.  “Mom, can I take off my shoes?” Go for it kiddo. She removed her shoes, and proceeded to splash and play in the puddle with wild abandon. 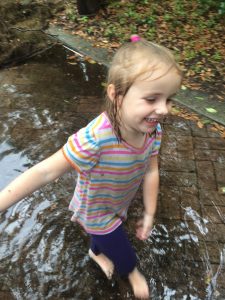 As she played, I placed her shoes safely in the diaper bag, next to the 3 changes of clothes I carry with me everywhere we go.  I felt somewhat relieved. Soaking wet shoes would have complicated our dinner plans for the evening. Going to dinner requires shoes.  Cat does not like wet shoes.  We’d managed to sidestep the ‘cancel dinner’ or ‘deal with the meltdowns’ choice that wet shoes would have required. I did have a soaking wet child, of course, but I’ve learned to expect (and prepare for) that.

This incident has led to some introspection on how I’ve come to handle behavior issues with Cat. This was a situation where what Cat wanted to do (jump and splash in the puddle) and what I wanted her to do (keep her shoes dry) were temporarily at odds with each other.  Under the punishment paradigm, such a situation would have led to two possible solutions. One, I could have threatened her with punishment. “Cat, if you jump in the puddle you’ll get spanked / time out / have to go home / etc.” Or I could have offered a reward. “Cat, if you keep your shoes dry, you’ll get a cookie after dinner.”

I can say with fair certainty that if I had gone the punishment/reward route, Cat would have ended up with wet shoes.  The reason is simple. Cat is an extremely strong-willed kid. She would have immediately recognized that there was a contest here, and the desire to win the contest would have only added to her powerful desire to jump in the puddle.  Guaranteed, Cat would feel that winning the contest was well worth the cost of enduring the punishment (or losing the reward).

According to the punishment paradigm, the answer here is to make the punishment bigger. The reward more enticing.  Continue until she cares more about that than about the contest.  But with Cat, the farther I go that direction, the stronger she digs in her heels. She sees it as a matter of integrity.  I’m reasonably certain that the amount of pain I’d have to inflict as punishment to overcome Cat’s strong will would tread well into the category of abuse.

But fortunately with the gentle parenting / positive discipline approach we use, we sidestep such contests entirely.  We try our best to stay clear of ‘your will versus mine’ contests and instead focus on working together to deal with the consequences and boundaries of the world that we both live in. And in this case I was able to use natural consequences as a way to steer Cat towards a compromise that made us both perfectly happy.