What if she just watches TV all day?

It’s one of the most common concerns about unschooling. The assumption is that given the opportunity, kids will simply consume TV or video games all day long in lieu of doing anything productive.  The unschooling position is that screen time, even a lot of screen time, is productive under certain circumstances.  And that’s because kids engage with screen time in different ways.  Sometimes, it’s an escape – a retreat from a stressful world. The kids shut down, zone out.  You hear things like “She doesn’t care what’s on, she just keeps staring at the screen”. When a child engages with screens in this way for hours on end every day, there’s a problem. The screen time isn’t the cause of the problem, but it is a symptom.

Unschooling kids rarely have a need to engage with screens in this way, because their lives generally lack the sorts of stressors that drive some children to retreat.  Screen time is just a choice among a broad range of options. An amazing choice, really. The amount of things I can do with a ubiquitous smart phone boggles my mind sometimes. Screens can do all sorts of things.  Learning things.  Productive things.  Creative things. Social things.  And, sometimes, mindless, escapist things. We all need a little of that now and then.  I allow my daughter unlimited screen time for one simple reason: Screens are awesome.

So, Cat has this great buffet of options every day.   When we first embarked on our unschooling adventure, we made a picture chart for the fridge – reminders of all the different types of activities that Cat could choose from, screen time included.  She tried them all, experimented, and played. Lots of screen time, sure. But pretty well balanced with everything else. Hey, I thought, this is easy.

But then, one morning, I asked Cat what she wanted to do that day.  “Mom, I just want to stay here and watch TV”. And that’s exactly what she did.  I figured the next day she’d want to get out of the house first thing for sure. She did not.  She watched a lot of TV. Again. And thus began her TV marathon. She spent day in and day out consuming hours upon hours of YouTube shows.  She discovered several new series and watched every episode she could find. Some overtly educational stuff, but mostly not. She went with me without complaint if I needed to run errands, but declined offers to go on trips to the park or the library.  She ate her meals happily and was cooperative at bedtime, but began to ask us to not read her stories at night because she was just too tired.

We have a scheduled weekly playdate with friends, and she continued to participate and play happily.  And she asked to ride her bike almost every day. She didn’t want to go anywhere on her bike, just circle around the house for hours on end.  But that was it. 2 hours riding her bike, and 6+ hours of watching YouTube, every single day.   That’s practically all she did. For several months.

As for me, I had a lot of free time.  I got a lot done. And I worried.  Suddenly I began to seriously question this whole unschooling thing.  I discovered that some parts of me were still holding on to the notion that screen time was less valuable than all the other cool things Cat could have been doing. But she wasn’t zoning out – she was very engaged in her shows. Enthralled, excited.  She didn’t sit and stare, she moved and bounced all around while she watched. She chatted with me animatedly when she had watched something she was particularly excited about. So, I kept my peace.  I decided to see where this all led.

And then, all of a sudden, things changed again.  It began when she brought me a kids’ cookbook I had strategically placed on a shelf, hoping she would find it and be inspired.  My plot had finally worked. She held it out to me, open to a page with “Fifi’s french toast” scrawled across the top. She declared that it was a recipe for “Fifi’s toast” and she wanted to cook it.  I was taken aback. Cat had always been precocious with language and literacy, but these were not words she interacted with regularly. And they were written in a flowery script. I have no idea how she had worked them out.  I told her we needed to make sure we had all the ingredients, and I pointed to the first one. “What does that say?” I asked. She said she didn’t know. But I was curious now. So I asked her to guess. “2 eggs” she declared without hesitation.   Absolutely correct. 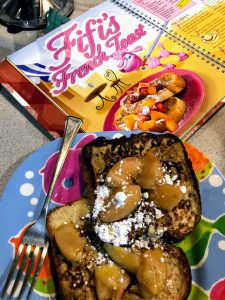 That day, things were pretty much back to normal. Or, what I had previously defined as normal.  Perhaps the occasional 3 month long screen time hibernation is Cat’s normal.  Regardless, she was suddenly choosing a much broader range of activities.  We made french toast, went to the park, and made some slime.  We giggled and played together. Our days returned to a  happy mix of screen time and all the other stuff.  Except, after a day or two, it became obvious to me that Cat had gained about a year’s worth of academic development during her 3 month YouTube binge.  She was a lot further on her path of learning to read, she could tackle much more complicated math concepts. All of a sudden, she can form letters and write her name.  I’ve even seen gains in physical development and social skills. 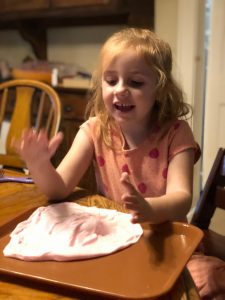 How did she accomplish all of this development by watching YouTube in our living room on her own for hours and days and weeks on end?   I have absolutely no idea. Why is sleep one of the single most critical factors for a child’s brain development? Maybe the answers are related.  I haven’t studied nearly enough about brain development to even form a hypothesis.  But I firmly believe that if I had intervened, if I had been a ‘good parent’ and limited her screen time and required that she spend some time doing ‘productive’ things, I would have actually slowed her development down.  In watching all of that TV, Cat was not being lazy.  She was not wasting time. Her brain was working harder and faster than ours ever do as adults.  No wonder she was too exhausted at the end of the day for even a bedtime story. 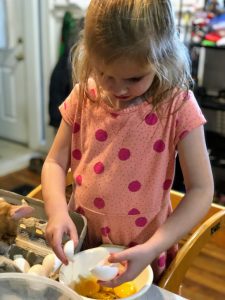 Now, I am not proposing that every parent should allow their child unlimited YouTube access.  Each situation is different, and if there’s a reason why that would be a bad idea for your family, than don’t do it.  I am not suggesting that TV time is an adequate replacement for all of the usual stuff we do to promote children’s development. Kids absolutely need opportunities to explore all the various elements of the world.  But when screen time is selected by an emotionally secure child, from among a broad range of interesting activity choices, there is very often a reason.