While studying education I was taught how important it is that we teach children ideas in a connected way.  Children learn so much better when what their learning is connected to something they already know, and have been thinking about.  Also, it’s best to connect ideas across the different areas of development. If you’re doing a unit on plants, you’re supposed to find ways to make math practice about plants, and literacy about plants, and on and on.

When I decided to embrace the unschooling philosophy, I let go of the idea of doing themed units. I didn’t mind.  I never particularly liked them anyway.  Planning and presenting an elaborate unit on butterflies to a classroom of children who are interested in nothing but superheroes was never a fun experience.  In my classroom, we tried our best to follow our kids’ interests so in that case we would have just done a unit on superheroes, but no matter what we did, it was a struggle to hold the kids’ focus with our teacher-directed activities. Not fun.  So, no more themes or units. I figured that if we just did whatever Cat wanted to do day in and day out, that we would sporadically jump from topic to topic.  I had this hilarious notion that a connected theme required a teacher with a well-written plan.

Over the last few weeks, Cat has been leading us through her unit on volcanoes. And I feel like I’m living out a preschool theme that was masterfully designed and laid out. Except of course there was no planning.  Guys, this is really weird to me. I keep seeing, over and over again, that the path to the highest degree of learning and engagement is for me to just step back and let Cat get on with it, but I still can’t completely get my head around it.

At no point did I teach Cat about volcanoes.  She discovered them herself as she perused the wide array of information available to her through her various screens.  And boy has the idea of volcanoes taken a hold of her imagination. 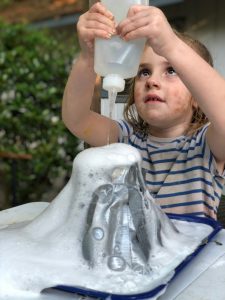 So here’s a partial list of some of our volcano-related experiences thus far.

Cat has asked many questions about volcanoes.  Where are they? How big are they?  What shapes can they be? How do they erupt? (Actually she says ‘explode’ almost every time.  I use the correct word when I’m talking to her about volcanoes, but don’t bother correcting her.) In response to some of these questions I turned to educational videos on YouTube about volcanoes. (I love YouTube).  These shows were great, and Cat was enthralled. And they prompted more questions than they answered.

While we were in the car one day, Cat wanted to know which planet has volcanoes.  I told her that several planets have volcanoes, including planet Earth. She told me, angrily and repeatedly, that Earth does not have volcanoes.  She was completely unwilling to listen to any alternate idea.  This baffled me for almost a week, until we were re-watching an educational YouTube video about volcanoes together.  The narrator mentioned that the tallest volcano is not on Earth, but on Mars.  Cat looked at me excitedly – “See mom! Volcanoes are not on Earth!”   Ah. I suddenly understood. I gently explained to her what the narrator had actually said and we had a short discussion about the different sizes of volcanoes.

At one point Cat declared that she wanted to go see a real volcano.  “Right now.  Can we mom? Don’t worry, I’ll wear safety gear.” Sadly, taking her to watch a volcano eruption in person was a bit outside of my ability, so we turned again to YouTube.  We watched many videos of volcanoes erupting and lava flows.

We chanced upon a delightful series of videos where people melted down lava rocks in blast furnaces and poured the resulting lava over random things.  “Lava vs. eggs!”  We watched quite a few of these together – she and I were pretty equally entertained.  This led us to videos of people melting down various metal objects and creating new objects.  Of course Cat wanted to go melt some lava rocks or bullets. We compromised, and melted and reformed crayons instead.  Since then, we’ve revisited this crayon melting activity every few days, at Cat’s request.

We joined my husband in Orlando during a business trip, and spent a day at the science museum.  Turns out they have a volcano display. Cat was riveted. We spent quite a while there.

Cat kept asking about seeing a real volcano. Finally it occurred to me that at least we could make one, and do the baking soda / vinegar thing.  I proposed that idea to Cat. Yep. Let’s do it. Immediately.   We erupted our little volcano repeatedly.  And that became another activity that we revisited every other day or so, at Cat’s request. Each time, she explored a different element of the baking soda / vinegar reaction.

One day we got out paints. Cat painted a volcano.  Another day we colored with crayons. Cat drew a volcano.  A few days later we pulled out various craft materials for a collage type craft.  She made a purple tissue paper volcano with red colored glue for lava. (At no point did I prompt her to make volcanoes with her craft supplies.  The activities were open-ended and without direction)

At the breakfast table one morning, we were idly playing with some chopsticks.  We started making shapes and pictures. Not one to let a literacy opportunity pass me by, I started making letters.  We made observations about the different letter shapes. If you turn an ‘H’ on it’s side it becomes an ‘I’. Turn it again, it’s an ‘H’ again!  Super fun. Cat made a ‘V’. She turned it over. “It’s not a ‘V’, mom! It’s a volcano!” That particular volcano set everything on fire.  We became firefighters, running around the house to control the blaze.

Cat has chosen to explore a great many other topics and activities over the course of this time, but she has brought up volcanoes or asked if we could do a volcano-related activity at least once a day, at all different times and places. I have no idea how long Cat’s volcano ‘unit’ will last, or where it will lead next, and I’m curious to find out.  I can already see some intriguing areas of play and investigation on the edges of what we’re doing. We pretended to be firefighters putting out ignited forests a few times. Maybe we’ll switch to a focus on firefighters. We did a water rocket activity where pressure in a bottle made it shoot in the air. When I explained what was happening, Cat made the obvious connection.  “It’s like a volcano!” So maybe we’re headed towards learning about the effects of changing pressures. The transition of lava from a liquid to solid rock has been a point of some interest. Maybe we’ll do more work with states of matter. Or perhaps we’ll just keep on learning more and more about volcanoes.

One thought on “Volcanoes!”