My daughter is a late talker.

Way late.  As she grew and developed, I watched in bemusement as younger babies and toddlers blew past her in verbal milestones.  But I didn’t worry.

Since preschool teachers are often the first to recognize developmental delays, I was taught when to worry. Or at least, when to it was time to encourage parents to go get a developmental screening.  Delayed speech is not necessarily something to worry about, but there are times when intervention is called for. No words at all at 18 months?  Time for a screening. Not using 3-4 word sentences by 3 years? Time for a screening. Etc. Each time, I watched Cat achieve the verbal milestone way later than her peers, but just before the age when I would have taken action. Sometimes it was a matter of weeks. And I didn’t worry. 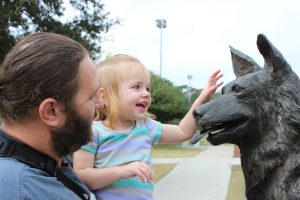 From 12 months on, each well-child checkup involved the same conversation with her pediatrician.   “Has she achieved this specific verbal milestone?” “Nope! She sure hasn’t!”. “Ok, if she doesn’t in the next 6 months you need to call me.”   “Will do!” And then of course Cat would achieve the milestone 5 months later. So I didn’t worry.

A well meaning friend did some worrying on my behalf.  Understandable. Her son was close to a year younger than Cat, and yet he was close to surpassing her in language development.  Something seemed not right, and I’m sure my complete lack of worry was a bit disconcerting. She expressed her concern that my assessment of Cat’s development was questionable, since as her mother I’m bound to be biased.  Perfectly reasonable point. It so happened that Cat’s 3 year checkup was the following week, so I mentioned my concerns to her doctor and she arranged for a speech screening and a full developmental screening.

Cat’s speech was assessed.  A normal score for her age was somewhere between 75 and 125.  She scored a 78. The speech therapist told me we could sign her up for speech therapy if I wanted to, but that she was not officially recommending it, since Cat’s language was technically within the normal range.   No thanks. Normal is normal. No reason to worry.

The full developmental screening was more involved.  The doctor tested all sorts of things. And her report:  Cat was about 6 months behind the average for speech. A bit ahead in physical development.  And at least a year ahead in academics. (That’s where she stopped testing. I’m fairly sure Cat would have been further ahead if she had kept going.)  The doctor said that her development is fine, no need for intervention. Imbalances like that tend to even out in time. She did, however, warn me that Cat is a child who would struggle in a regular school program.

Yep.  We’d already worked that one out. 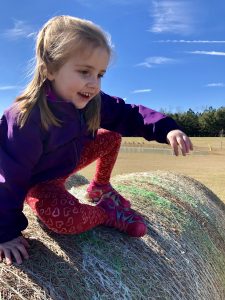 Cat’s screenings had the effect of confirming that my assessment of Cat was pretty dead on.  So, I continued to not worry. I did nothing, changed nothing. I provided no interventions. I simply continued to fill Cat’s world with conversation, words and books, as we have done since she was born. And Cat’s speech has steadily improved.

Cat is four now, and her speech has exploded.  Her vocabulary is massive. She uses more words than I could begin to count.  Her sentence structure and conversational skills are totally normal. Her articulation continues to lag behind the average, but I’m seeing daily improvements. I’m predicting that she’ll have pretty much caught up by the time she turns five.  If my predictions are at all accurate than it is just a matter of time before we laugh our heads off over the idea that her speech was ever a source of concern.

And I’m not going to worry.

One thought on “Why Should I Worry?”