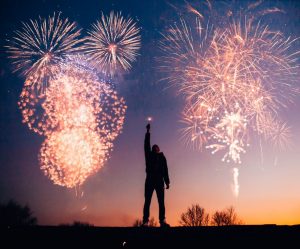 Ah, the 4th of July in America. Our special day to celebrate the wonderful freedoms that some of us enjoy. Proud traditions of blowing things up.  Cat is already beginning to thoroughly enjoy the yearly visit to a big tent to go buy large numbers of small explosives with her daddy. 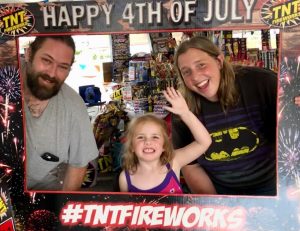 But are they safe?  These mini sticks of gunpowder, salts and metal filings whose entire purpose is to be lit on fire and subsequently explode?  As it turns out, they’re a whole lot safer than I would have guessed. In the days leading up to this 4th of July, a local fire department posted a warning that came across my Facebook feed, alerting the world that our explosive gunpowder sticks can be dangerous, and are to be treated with caution.  Now, I fully endorse this message. Be careful with your fireworks, folks.  But one particular detail caught my attention. The infographic warned that an average of 180 people are seen for fireworks injuries every day in the month surrounding the 4th of July holiday.

180, I thought.  That..is a number.  I’m clearly supposed to be alarmed by the highness of that number.  And it is, indeed, significantly higher than some other numbers of which I am aware.  2, for example. Or 17. On the other hand, though, it is a good deal lower than a couple of higher numbers that immediately spring to mind.  Such as 2,854, or 5 million. 180 on its own is a pretty useless piece of data.  If that’s the number of injuries in my local county alone, then that is truly disturbing. But I doubt it.  If it’s the number of injuries across the country, it actually seems bizarrely low. I checked to see if there was any reference to the geographical area that particular statistic covered.  Nope. I chuckled to myself, imagining how angry my college statistics professor would be by such a use of data.

I was curious now.  So I did a little checking into other data sources, and confirmed that apparently the number was pretty close to 180, a day, throughout the US, specifically from June 22 to July 22.  And the number of people killed by fireworks each 4th of July sits around 6 or 8, depending on the year.

180 injuries.  6 deaths, maybe 8.  Those numbers are certainly higher than zero, the number we would wish.  Fireworks should be a harmless American pastime, not something you could potentially die of.  But I’ve spent a fair amount of time looking at statistical data, particularly data surrounding risks of injury or death.   And when I thought about those numbers in terms of other risks we take on a routine basis, I began to wonder whether fireworks might actually make for one of the safest of our standard 4th of July traditions. 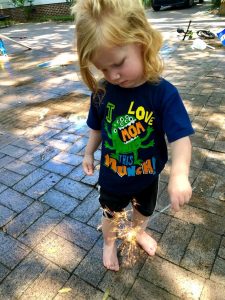 So I started looking at some CDC data tables and other reference sites, and comparing some numbers.  Numbers should never stand alone. We have to compare them to something if we want to know what they’re really telling us.   So let’s make some risk comparisons, starting with the obvious. We exposed our party guests to a small degree of risk when we handed them lit sparklers or set off fountains of showering sparks.  But that risk was teensy compared to the risk they ran by driving to our house in their cars. 6 or 8 people are killed by fireworks on the 4th. The number killed in car wrecks across the US, on the same day?  Over 600.  Meaning that launching fireworks is one hundred times safer than driving to the party on the 4th of July. A quick note here:  Sometimes risk comparison is done using percentages, as in, ‘women over 35 are 100% more likely to have babies born with birth defects.’  This can be way, way misleading. A statement like this makes it sound like the difference is huge. But if the odds of one thing happening is, say, 0.5 percent, the odds of something 100 percent more likely would only be 1.0 percent.  If death by car accident was 100% more likely than death by fireworks, the number would go from 6 to 12, not from 6 to 600. Driving is not 100% more dangerous, it’s not 200% more dangerous.  It is 10,000% more dangerous than fireworks.

Some other fun comparisons. Our 4th of July guests were roughly 23 times more likely to be injured, and 16 times more likely to die from taking a fall off our porch than from our fireworks.  Food poisoning? Choked on a hot dog or a potato wedge?  Way, way bigger risks. There are 5,200 emergency departments in the US as of right now.  Meaning that your local ER has a 1 in 28 chance of treating just one of the 180 fireworks injured patients on any given day. The odds that a randomly selected ER patient is being seen for a fireworks injury is 1 in 2,222.

It’s important to make a note here about conditional probability.  The number of people who drive or eat on the 4th is undoubtedly higher than the number who play with fireworks.  So comparing fireworks directly to car accidents or choking injuries is, perhaps, a bit disingenuous.  But conditional probability goes the other way too. In my reading about fireworks injuries I ran across some exciting tales of drunkenness and unparalleled stupidity.  College students lobbing lit fireworks at each other – the grown up game of water balloons, evidently.  One inventive fellow built a little platform, strapped it to his head and launched his mortars off of it.   The data does not distinguish between those who were injured by fireworks while using them with a degree of sense and sobriety, versus those who decided to put their face directly over the mortar to see why it hadn’t gone off.

So, like most things, fireworks are pretty darn safe, but they get exponentially more dangerous if they’re used recklessly.  And the vast, vast majority of us get through the 4th alive and unscathed, year after year.

My point with all of this is not too encourage recklessness with fireworks. They are filled with gunpowder and they explode.  A reasonable degree of caution is entirely appropriate. But there’s something else we need to use with caution. Statistics.  Data.  Used appropriately, statistical data can be used to inform and educate, providing our society with the information we need to make good decisions for ourselves and our families.  They are a tool that can be used to give us a more accurate picture of our world than we could see on our own.  But, too often, statistics are used to achieve they opposite affect.  They are used to obscure the truth, and frighten us.  Rather than giving us a clearer and more accurate understanding of the world, they are thrown around to prove one point or another.  And, quite often, this works. They scare us, and the fear that is currently gripping our society is beginning to have some truly frightening consequences.