Last Sunday was a very rough day.  Cat was in an extremely defiant mood.  She placed a ball into her mouth. I asked her to take it out, as it’s a choking hazard.  A minute later, she placed it back in her mouth, seeming to shove it in as far as she could. I confiscated the ball, and escorted her to a room with fewer choking hazards.  She began to push and drag the dog from place to place, and try to trap him with pieces of furniture. I asked her politely to stop. She did not stop. I escorted to another room, away from the dog.  She screamed at me. And hit me. Stomped to the kitchen and demanded that I give her candy.

Ooof.  We had officially entered into the territory of unacceptable behavior. Any of these infractions individually would not have concerned me overly.  She’s four, she makes mistakes and she’s learning. Simply intervening as much as needed to protect the house and people (and pets) in it would have been enough. But these were not mistakes, these actions were repeated, intentional acts of rule breaking, apparently for the sake of rule breaking.  Straight up defiance. Something was going on, and I needed to intervene.

But I don’t punish.  No time outs, no lectures, no spanking.  Instead, I began the positive discipline process I was taught in school.  The theory is simple, but in practice the process is complex enough that we spent an entire semester dedicated to it. Those who want to pursue further education in behavior management can actually pursue advanced degrees in this basic process.  It’s based on the assumption that all behavior is motivated by needs. So, if a child is exhibiting unacceptable behavior, you identify the need that is motivating the behavior, and help the child find an acceptable way to meet the need.

These needs can be the ones we usually think of – hunger, fatigue, etc.  But we have needs that go far beyond that. Here’s a pretty good list. (It’s from the book Nonviolent Communication, which is an absolutely fantastic book. If you want to learn more about this sort of process, that’s where I’d suggest you start).

So, Cat is exhibiting unacceptable behavior. Why?  She clearly has an unmet need. What is it? Physiological needs are always my first thought. Is she hungry?  She had demanded candy, so maybe. I reminded her of the acceptable way to request food. She requested food. I didn’t give her candy, but did provide her with a healthy snack.  She took a few bites and started throwing the rest. Nope, hunger was not the need.

What else could be going on?  Is she tired? Possibly. She had just switched from her crib to her big bed.  She’s had the option for months, but had exhibited a powerful desire to stay in her crib until about four nights ago, and all of a sudden she was ready for the switch.  So yes, very possible that she’s been dealing with some disturbed sleep. Her allergies have also been particularly bad – congested and runny nose.  So, this all could definitely come down to tired and not feeling good. Maybe she just needs to release some destructive energy.  Time to go outside. Freedom, space, sunshine. Those should help. I suggested that she go play in some sand, or water, or mud. Those are usually outlets for the mood Cat seemed to be in.

But she declined those suggestions, and climbed on her balance bike. She is allowed to ride her bike around the outside of the house as long as she stays on our property.  The day before, she was riding her loops around the house and came over to Dove and I from a side we hadn’t expected. We commented that she had surprised us. Evidently surprising us in that way had more of an impact on her thought processes than I had realized, because she demanded to know which path around the house would surprise me this time. 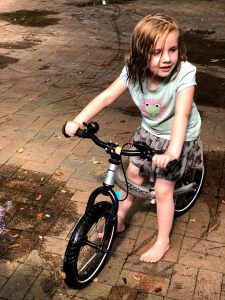 We talked about surprises – specifically the fact that if I told her something specific that would surprise me, it wouldn’t really be a surprise. We talked about expectations, and how a surprise is something that we didn’t expect.  She thought about this for a few moments, and then asked a better question. She asked what route around the house I expected her to take.  I indicated that I expected her to take the route she usually takes.  She biked off, with a determined look on her face. I heard her mumble “So I will not do it” under her breath as she headed around the house.

She did indeed take a different route from the one I indicated.  I enthusiastically expressed that I was surprised. Not exactly true, but I wasn’t going to complicate things right at that moment.  She asked me what route I expected now. I told her. She went another route. Surprise! And thus began some serious mastery work. I told her the route I expected, she took a second to figure out a route that was different, and followed it.  Upon returning, she would exalt over successfully surprising me.   She continued this game for nearly four hours. It was clearly serious work.  The process of hearing me tell her one thing and then doing something different clearly took a fair amount of cognitive effort.  And when we went inside, the defiance was gone. My helpful and polite girl was back.

She has requested to play this ‘surprise’ game every single day since that day.  And sometimes she plays it for hours on end. Fine with me. I get work done around the yard or work on my phone or tablet while she spends hours on her bike? Deal.  She has added a new element – she asked me once what animal sound I expected her to make while she biked, so I told her I expected her to moo like a cow. And she made a different sound.  So now she thinks through a different route and a different animal from the one I said at each go around. 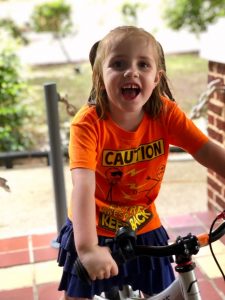 The mastery nature of this play means that what she is doing is something that her brain was essentially demanding that she do.  It was time for her to learn something new, in this case I believe it specifically has to do with listening to what an authority figure says, and doing something different. Her sudden move to her big bed is probably related.  She’s ready for some more independence. In one way, I’m not thrilled that her brain has decided that it’s time for this learning, but at the same time I know that gradually moving towards autonomy is what growing up is all about. It’s a long slow process of Cat disconnecting from us and becoming her own person. And the choice I have is not a choice between her learning this autonomy (or defiance) and not learning it. The choice I have is between her going the ‘wrong’ way around the house versus engaging in ‘wrong’ behaviors, like hitting me and screaming for candy.   And I’ll happily play the ‘surprise!’ game for a few hours a day in exchange for peace the rest of the time. Eventually she’ll move on from this mastery stage, with a new tool in her tool box. One that she needs, whether I like it or not.

One shortcoming of the positive discipline process is that it is intensely personalized.  My solution to Cat’s defiant behavior ended up being a game where she ‘surprised’ me on her bike.  It is unlikely that another situation of defiance would be helped by that precise solution. In cases of professional intervention for serious behavior problems, it is normal for the first step to be a solid two weeks or more of nothing but observation, so the behavior specialist can thoroughly understand all aspects of the situation and correctly identify the need being expressed.

But punishment systems suffer from the same problem.  Let’s say a child has a biting problem.  Definitely an unacceptable behavior, but not one with a single solution.  Putting a child on time out for biting might help, but it’s just as likely to do nothing, or make the problem worse.  The child is biting for a reason. In one way or another, biting is meeting a real need.  Punishment paradigm says the answer lies in making the punishment for biting more and more painful until the child cares more about that pain than about the need that is motivating him to bite.  This can lead to abuse.  It can lead to the problem worsening, or transitioning into something worse.  Identifying the need driving the behavior and finding a good solution takes effort and work, each and every time, but the peace at the end of the process is always worth it.

One thought on “Surprise!”