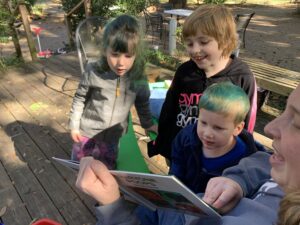 After our usual start to ‘circle time’  – singing songs and reading stories, I pulled out a sheep puppet and introduced him as Sam, a new member of our class.  The kids were enthralled.  They jumped up and ran over, giving Sam hugs and welcoming him.  We always start with a ‘hello’ song, and Cat asked if we could sing it again, for Sam’s benefit.  We happily agreed.  Then, Sam said he had a question and he wanted to ask them because he’d heard they knew a lot of things.  He explained that he had been looking up at the sky the night before, and that it had been filled with a whole bunch of little tiny dots.  What were those dots?  “Stars!” the kids excitedly exclaimed.  Sam: “What? Stars? They weren’t stars, they were dots!”  Kids:  “They were stars, they were just really far away!”  I drew a star shape on the easel.  “You mean they’re like this?  They’re star shaped?”   Maya grabbed a marker and drew a circle.  “They’re like this!”  She drew a row of dots.  “But they look like this because they’re so far away. They’re like our sun! Our sun is a star!”  Sam scoffed.  “They’re not like our sun.  Our sun is so big and bright and hot!”  Kids:  “They’re like our sun, but they look small because they’re so far away!!” 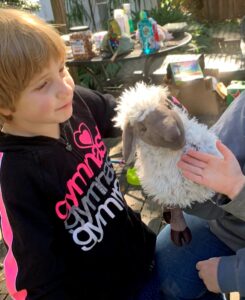 I stood up and carried Sam to the edge of the porch.  “Ok then, I’m going. I want to go see these stars.” I made Sam jump.  “I’m going to jump so high I go to the stars!”  Sam jumped and jumped.  The kids immediately got up and started jumping too.  I encouraged them to spread out and jump as high as they could, again and again. We all jumped and jumped.  After a minute or two, I sat back down with Sam.  Sam:  “I tried to jump but I just kept coming back down.  Why can’t I jump all the way to the stars?”  Kids:  “That’s because of gravity” 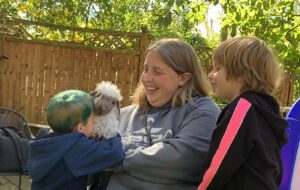 At this point, the kids explained to Sam about gravity.  I was actually surprised about the depth of their understanding.  I did nothing but ask questions, and they explained that gravity is an invisible force that pulls everything down towards the earth.  That things get pulled towards the earth unless something holds them up.  That there if we turned off the gravity somehow, everything would float around, like it does in space.  Cat even enthusiastically volunteered that if it wasn’t for gravity, the earth would break apart into pieces, and that if the ground and the surface of earth wasn’t holding us up, we would be pulled down into the earth’s core.  In other words, they taught Sam every single point about gravity that I would have taught them, had our lesson followed the standard model, and they took it even further.  They have never been formally taught about the concept of gravity.  They picked up everything they know from screen time.  Primarily, YouTube.

Then I prompted them to consider what actions are made easier by gravity, and what actions are made more difficult by gravity.  I gave them some examples.  Going down a slide is easier, but jumping is harder.  Then I asked them to use the variety of chairs, wooden planks, boxes and other items in the yard to make an obstacle course that includes actions that gravity makes easier and actions that gravity makes more difficult. 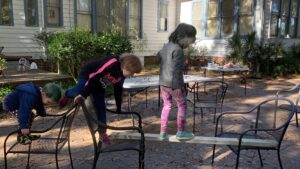 They built their obstacle course enthusiastically, but when we asked them whether gravity was making their actions harder or easier, I began to realize my mistake.  Leslie asked Maya whether climbing up a ladder was easier or harder because of gravity.  She fervently answered that it was easier, because with no gravity she and the ladder would float away.  Good point.  At that point I let go of the goal of helping them see gravity’s effect on their actions, and just encouraged them in the obstacle course building and playing.  Leslie, however, had a very good idea.  She set up a ramp and grabbed some balls. She showed the kids that they could demonstrate the effect of gravity on the balls using various ramp setups.  The kids were excited, and played with the balls and ramps for a while.

When that activity wound down, we took a break for some free play and lunch. As they were playing on the trampoline Leslie overheard some amusing exclamations.  “Oh no, we turned off the gravity!  Get the baby!  She’s floating away!”  I was thrilled.  The fact that the concept of gravity had made it into their play session means my efforts had been well worth it  One of my college professors had made it clear in no uncertain terms that if we taught the kids ideas during class, but didn’t see them explore those ideas during free play, that our effort was wasted and learning hadn’t occurred.  They learn when they play, full stop.

After lunch I began to set up our 2nd gravity activity – splat painting.

Setup: We rolled out some butcher paper on the ground and set a ladder, chairs and a table around the paper.  We pulled out the paints and filled several squeeze bottles.  Since this was a pure process activity, we added a few squirts of paint to each squeeze bottle and topped them off with water.  Lots of vivid color, but a lot more economical than using straight paint.  I had set aside some clean egg shells.  In addition to the squeeze bottles, we filled some pie tins with diluted paint and set out some sponges and washcloths. 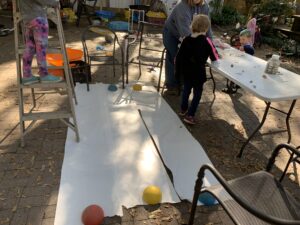 Activity:  To start with, I had the kids help fill up the eggshells with paint using the squeeze bottles. Then, I asked them to climb to a chosen spot on the ladder, chairs and table around the paper.  I gave them paint eggs one by one and they threw them onto the paper.  Some of the eggs they threw, some they dropped, and Leo tried pouring the paint out first and then just throwing the shell.  When the eggs ran out, I indicated all the items on the table – the pie tins, sponges and squeeze bottles, and told them they could play freely.  We turned on some music and they made a giant, colorful mess. 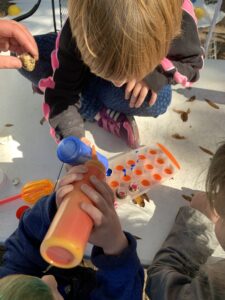 When everyone felt done painting, we cleaned up together.  Leslie decided that Leo needed more time outside and decided to stay out with him while I took the girls inside for table time.  The table held a variety of games and puzzles, as well as worksheets I had printed out that had to do with gravity.  Cat has been fairly obsessed with coloring lately so she chose a worksheet that consisted of a series of coloring pages that staple together to make a book about gravity.  Maya decided to join her in making a book, and they worked side-by-side, coloring every page.  When they were finished, they played a few rounds of “Guess Who’ together. 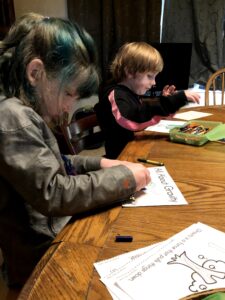 At that point, I explained the ‘homework’.  There were more worksheets, and Leslie chose a few she thought Maya would enjoy doing at home.  I also described how gravity compresses our spine over a full day of standing and sitting, and our spine lengthens out as we sleep.  So I told the kids that if we measure our height in the morning and again at night, we’ll actually be a bit shorter at the end of the day because of the effects of gravity on the body.  Lastly, I asked the kids to watch some YouTube videos about gravity at home, and choose their favorite to share with the class on the next school day.   The homework is optional of course, and there are no grades.

When Dove got home from work that night, Cat enthusiastically read him the ‘gravity’ book she had colored during class.  He generally helps her with bedtime at the end of the day, and they make a game of it.  Today, he made the game about gravity.  He dropped her pajamas to the floor.   “Oh no!” he exclaimed.  “Gravity is stealing your pajamas.  He dropped down and did an over-the-top pantomime of pulling the pajamas back off the floor.  “Give them back gravity!  I will overcome your force!”  Cat was in helpless giggles and fell asleep quickly after a full, full day at home.

Day one of school:  absolute success